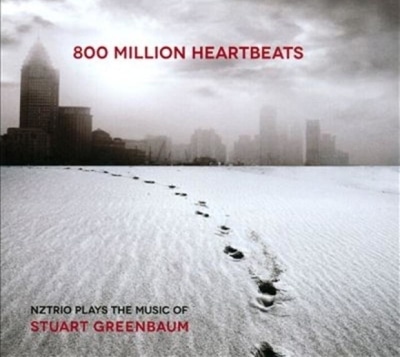 NZTrio plays music of Stuart Greenbaum. With this new album, their first on the ABC Classics label, NZTrio presents music by award-winning Australian composer Stuart Greenbaum. The Greenbaum sound has clear connections to jazz, pop and minimalism but goes beyond these important influences: ‘I often conceive of music in terms of journeys, but I also believe that music should be appreciable as pure, abstract sound in time. Either way, my music aims to evoke an atmosphere apart from the routine of modern life. At times, I think we lose a sense of wonderment at our earthly surrounds. I believe in the need to cultivate space in a world increasingly filled with commercialism, light and noise pollution and 24/7 thinking’.

Falling by Degrees for Violin and Piano

The Year Without a Summer

Recorded at the Melbourne Recital Centre in 2011 by Haig Burnell and the ABC team.

Melbourne composer Stuart Greenbaum’s chamber works, like all the best art, is in the world but not of the world – qualities which are sympathetically brought out in these performances by one of New Zealand’s leading chamber ensembles, NZTrio. Head of Composition at the Melbourne Conservatorium, Greenbaum has written opera, choral, orchestral, chamber and solo instrumental music. This new recording features eight works exploring the latter two genres from between 1999 and 2011. The title work, 800 Million Heartbeats, takes the nominal number of heartbeats in a human life as a metaphor for life’s journey. Falling by Degrees explores gravity and falling in seven miniatures. Equator Loops and Lunar Orbit are for solo piano and cello respectively, while The Lake and the Hinterland and Scarborough Variations combine both instruments. The Year Without A Summer takes the 1815 eruption of Mount Tambora as its subject. Greenbaum says his music “aims to evoke an atmosphere apart from the routine of modern life”. But by drawing on familiar styles such as blues, pop and jazz, his music celebrates modern life in all its forms. It simply jettisons the routine. Thus 800 Million Heartbeats tells the story of our lives through soaring string melodies singing over the steady pulse of piano figurations. In Falling by Degrees, ghostly harmonics, agitated pizzicatos and deliberately naïve descending scales through up images as diverse as snow, parachutes, anchors and the Stock Market through expressive abstraction. NZTrio’s passionate interest in contemporary and world music makes them the ideal interpreters for Greenbaum’s eclectic music. They don’t disappoint in a series of works which deftly juggle particulars and universals.

For an Australian with a number of New Zealander relatives, this Trans-Tasman musical connection was of particular interest. The CD presents music that is partly the result of a collaboration between the Australian Music Centre, its New Zealand equivalent SOUNZ, and the residency they arranged for Australian composer Stuart Greenbaum with the Auckland-based NZTrio. NZTrio personnel – Justine Cormack (violin), Ashley Brown (cello) and Sarah Watkins (piano) – are all fine soloists, as demonstrated here by the varied repertoire: three trios, one piano solo, suite for violin and piano, two works for cello and piano and a cello solo. All pieces were composed between 1999 and 2011; The Year without a Summer is the outcome of the composer’s New Zealand residency in 2009. 800 Million Heartbeats opens the program. We are informed that the lifespan of most living creatures lasts for around 800 million heartbeats, thus the title is a metaphor for the journey of a life. Greenbaum deftly manages to express this concept in a gentle, expressive work of around eight minutes. Whilst it could not be described as a perpetuum mobile, constant motion is the main impression of this intriguing trio. Falling by Degrees for violin and piano is the longest work on the CD. Its seven movements describe things that fall. First is “Meteor” which features descending filigree piano figures and glittering violin melody, then a more dramatic section before the meteor crash lands. “Snow” fall is depicted by an ethereal, eight-note theme for violin, echoed in a rocking piano motif. It has the effect of a lullaby, whilst still interspersed with downward moving phrases. “Parachute” is more chordal, still with that descending motion before a soft landing. “Apple” is rather jaunty, sounding briefly like nursery song before moving on, while “Anchor” is slower and lower in sonority, quite sombre in mood. The final two falling things represent a more metaphorical – or perhaps humorous – frame of mind: “Stockmarket” stops and starts, alternating soft and loud repeated notes before a quiet ending, followed by an even quieter and very brief “Night” fall. This beguiling music is unified throughout by downward motion. Gravity is not far from our consciousness. In total control of technical challenges, it is performed superbly by Justine Cormack and Sarah Watkins. Equator Loops is a subtle work, inspired by the music of Arvo Pärt. Its static, meditative harmonies recall Pärt’s emotional impact whilst not being in any way an imitation. It is a totally individualistic expression from Greenbaum. Based on a tonal centre, the piano makes an alluring series of ornamented forays away and back. In this gem, which must be a delight for any pianist, Sarah Watkins gives a sensitive, committed interpretation. Living temporarily on the “shaky isles” during his residency possibly meant that Greenbaum was more alert to earthquakes than usual. In fact, two major earthquakes occurred in Christchurch not long after.The Year without a Summer was inspired by a massive eruption in Indonesia, bigger even than Krakatoa which destroyed a whole island. The work is divided into two sections, “1815 – And then the Sky was filled with Ash” where the composer evokes the disturbing events, once again with downward figures reminiscent of “Meteor”. “1816 – The Year without a Summer” describes a time when the ash from the previous year blotted out the sun, cooled the earth, ruined crops and turned peoples’ lives upside down. The music is mostly contemplative in mood, sometimes desolate, yet with a quality of nobility. This is a moving work, splendidly played, and an excellent addition to the body of music for piano trio. The Lake and the Hinterland is a duo for cello and piano which features a singable melody – not surprising, as it was inspired by a poem, Late Autumn Lullaby by Ross Baglin, particularly the lines: Stay close now as winter’s White fuse burns across The lake and the hinterland Lunar Orbit was written for and dedicated to Ashley Brown. Pianissimo, pizzicato and glissandi create an eerie picture, almost like a cry for help as the astronauts are isolated from their fellow man in the lunar environment. The composer is not afraid to use silence. In this atmospheric work we are transported via a beautiful performance by the solo cello. Scarborough Variations are based on an English folk-tune we know well, probably due to Simon & Garfunkel. We get snatches of the tune in what Percy Grainger might have called a ‘ramble’, and an absorbing ramble it is, in the company of cello and piano. Only towards the end is the whole tune revealed. The final work on the CD was originally composed as a sextet for the Sydney-based Sonic Arts Ensemble, formerly the Seymour Group. It was to be the final commission before the ensemble disbanded, hence the name Book of Departures. It was arranged for piano trio a year later. Conceived as three ‘chapters’, the piece is composed in one movement. It features a delicate interplay between the three instruments, the music travelling between different moods – happy, triumphant, nostalgic – to finish on one of optimism. A website tells us that Stuart Greenbaum has been influenced by minimalism, pop and jazz; if so, traces of those styles in his composition are well integrated. It is difficult to apply any sort of label to his music other than to describe it as subtle, profound, always approachable, with strong emotional impact and very enjoyable. Bravo. Gwen Bennett – The Music Trust (online)

Science and geography form a compatible union in this music by Australian composer Stuart Greenbaum performed by New Zealand musicians Justine Cormack (violin), Ashley Brown (cello) and Sarah Watkins (piano). The title track sets the scene as NZTrio make a gentle passage through rhythmical patterns representing various life pulses, including the estimated 800,000 heartbeats in the lifespan of a hummingbird. Humans need many more for a long life, Greenbaum notes. This is an ingenious exercise linking musical form with cosmic realities. Greenbaum’s PhD thesis exploring Arvo Part’s Te Deum says it all about the minimalist compositional techniques he incorporates to give new dimensions to natural phenomena represented in pieces such as Equator Loops, A Year Without a Summer (inspired by an 1815 Indonesian volcanic eruption), Lunar Orbit, gravity-inspired movements of Falling by Degrees and Stockmarket, portrayed in 74 seconds. These mystical heartbeats are mesmerising.